Chicken Caravan was started by a 24-year-old Daniel OBrien who needed some moveable chicken sheds for his new adventure into free range egg farming.

Daniel OBrien with the first lot of chickens back in 2010 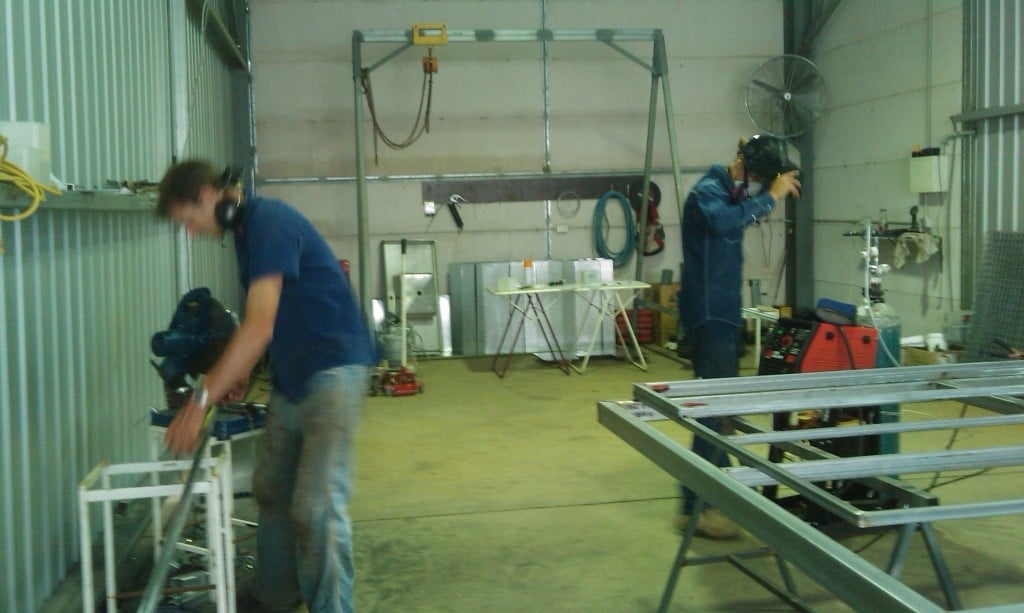 The small workshop where the first Chicken Caravan was built

In August 2010, Daniel bought 2000 day old chicks to start a dream of having a free range egg farm. At the time he didn’t have any of his own moveable sheds, so Daniel with the help of a friend worked out a design criteria, and went to the drawing board. During this time he began looking for a partner with adequate organic pastures for a larger operation for their new business ‘Oxhill Organics’. They soon contacted Chris Eggert from Wauchope NSW, and after talking over the possibility to set up a certified organic free range egg farm, a partnership was formed. Since then it has been a journey of innovation and learning as they develop new ways of sustainable farming with a goal of producing a more nutritious and flavorsome organic egg.

Daniel went on to build the first Chicken Caravan in December 2010.

In March 2011, after building 6 Chicken Caravans for his own farming operation, other farmers began asking if he was going to start selling these ‘Chicken Caravans’. So in November 2011 Daniel, his dad Robert debuted the Chicken Caravan at the “Farming Small Areas Expo” in Richmond, Western Sydney. They consequently sold that first caravan to Farmer Brown’s Free Range Eggs in Dunedoo NSW.

2012 saw the operation of a full-time workshop building Chicken Caravans and 1 full-time employee.

By mid-2012 the second Chicken Caravan was sold to Gippsland Free Range Eggs in Victoria.

Research and development continued, and soon they developed the Chicken Feed Trailer and Chicken Caravan 130, the latter being a smaller scale version of the original 450 bird Chicken Caravan. The first 130 was sold to Buena Vista Farm in Gerringong.

2013 was an auspicious start with the Chicken Caravan winning the Australian Farm Invention of the Year. The team began to expand with both an apprentice and a trainee joining the team.

In January 2013, the Eggert family took over the entire Oxhill Organics operation on their family farm at Wauchope NSW, and Daniel was able to devote more energy and focus into developing Chicken Caravans and other free-range farming products.

2014 saw the development of the flat packed Chicken Caravans and these were field tested in Western Australia, South Australia and Victoria. In December 2014, the first Chicken Caravan was exported from Australia to New Zealand and the first USA sales were made.

Between 2015-2017 we took on a huge task of setting up our own packing/assembly facility in China. This came with huge risks and many unknowns navigating a foreign culture with a language we could not speak.

Initially, we were nervous as our goal was to not just deliver the same quality products as we were already producing but to deliver better quality. One of our main goals was to produce a mobile chicken shed with a hot dip galvanized chassis. This was very important to us because we had seen first hand how corrosive chicken manure can be on pre-galvanized steel. We also wanted all our nesting box sheet metal to be laser cut and machine folded taking out any human error giving the end product better look, functionality and ease of assembly. We have now successfully done these things.

We were so happy once the set up was complete in China as we were then able to help more farmers in USA, Canada, Europe and beyond. It was extremely rewarding to see pictures of the Chicken Caravans on farms in countries that we had not even visited before. It was great knowing that we played a part in the change that these farmers were making in the agriculture industry of their nation and changing the way poultry farming is done.

There were skeptics, crying – “it’s made in China!” The truth is that Chicken Caravan has proven itself hundreds of times over with its superior quality Hot dip galvanized chassis. It is an Australian innovation, developed and owned by an Australian family, delivering world-leading technology and performance that benefits farmers around the globe. Our family has risked everything to finally deliver to you, a revolutionary system to produce ethical eggs. Although the journey was extremely hard we are proud that this system is now available to farmers in the rest of the world.

Daniel left school at the age of 15 and just wanted to breed chickens.  Soon after leaving school, he got his first job at “Red Hill Farms” which is a certified organic avocado farm that also grew organic meat chickens, from then on Daniel started to learn about organics and poultry from his new boss and mentor John Shelley. Today Daniel and John are best of mates.  Daniel went on to work at other free range egg farms and learnt as much as he could along the way. Daniel is married with 3 children.

Got a question? ASK the Team here
We use cookies to ensure that you have the best experience on our website. By closing this message, you consent to using our cookies on your device, in accordance with our cookie policy, unless you have disabled them. You can disable them, by accessing the settings of your browser.Ok